Our Driver Profile: A NATCO Exclusive.

Starvin Marvin: a Feast of Dependability.

All of which gives Marvin Johnson easy access to two of the main highway arteries of Texas. And that’s key: Marvin is the owner/operator of Starvin Marvin Transport, his private transportation business.

Marvin signed on with NATCO last August, and in these past seven months he’s managed 104 loads for us. His first delivery with us: Arlington to Fort Worth. Skidded stainless sheets. With a 48-foot flatbed hitched to his cab, his loads have all been delivered, um, without a hitch.

Marvin’s delivery radius stays mostly in the Dallas/Fort Worth area. Local orders are always a challenge. Yes, shorter distances are involved, yet they can be time consuming. You need to accommodate factors like the ability to load right away and manage waiting time, so sourcing the right carrier is a priority.

Time and again, Marvin has been our go-to carrier. He usually picks up our call right away; if not he usually phones back within ten minutes. And he fills out his paperwork thoroughly.

Driving is Marvin’s second career. After twenty years at the GM plant in Arlington, he took early retirement. He’d always loved the road, and so he learned how to drive a truck.

Marvin started driving professionally in 2002. “I worked for three different companies in four years,” he says. “Then in 2006 I bought my first truck, a freightliner Columbia. I have over a million miles on it. And yes, I have someone else repair it. That’s why it’s still running.”

Two things contributed to Marvin’s decision to stay local. After doing cross-country routes the first three years—and seeing every state in the country except for North Dakota and Maine—it got to be routine.

More importantly, his youngest child was entering junior high school, and Marvin wanted to see his development, both academically and on the basketball court. All four of his kids have done well. Marvin, though, had missed out on their daily routines. It made perfect sense to stay local.

“NATCO is good on both ends,” he says. “And the shipper is most always ready. That’s why I really like these loads. I can do three or four a day and still go home every day. I place a great value on that.”

He communicates with both Shaquanta McCleary and Sharon Porter here at Team NATCO.

“Marvin is incredibly dependable,” says Shaq. “From the first time he phoned in, we saw a good match. He’s most always available and punctual. His paperwork is always good and he maintains excellent communication.” 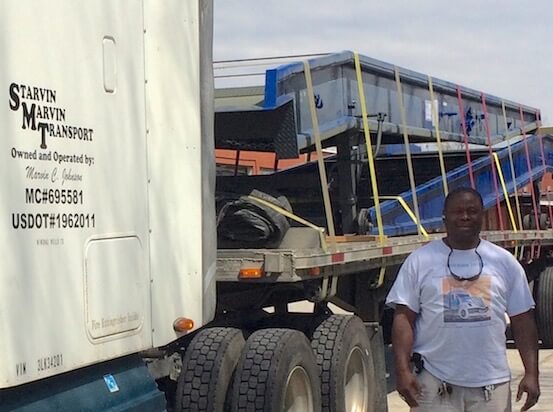 Founded with integrity, built with dependability.

Marvin says, “I feel like I know them, though we’ve never met. I get along with everyone. And even though I’m a really laid back person, I do whatever needs to be done.”

“Starvin Marvin” is a nickname he’s had forty years now, given to him by his football coach in junior high and high school. (Marvin was a local celebrity in town—running back, fullback, and tailback. It’s Texas, remember. Football is a way of life here.)

Have a look at the photograph to the right. It’s classic Marvin. First his shirt: just under the graphic of the truck it reads, “Founded with integrity, built with dependability.” And then his belt: he always carries two sets of keys to every moving piece of equipment he owns. “Locking myself out,” says Marvin, “is not an issue anymore.”

The secret to Marvin’s success? He’s both humble and grateful in his answer: “I give God all the glory for anything that I do. Starvin Marvin belongs to God; I just manage it. I try to treat everybody right and not take any shortcuts.”

We appreciate Marvin’s friendliness and professionalism, his availability and his consistency.

His wife says, “If you can’t get along with Marvin, then you really have a problem.”