In the eyebrow-raising department: Congress enacted the Federal Excise Tax (FET) in 1917, 104 years ago. The three percent tax was designated to raise much-needed money to support national efforts in World War I. That sounds reasonable. The Allies won the war. The FET has remained ever since.

Today, that tax rate is 12 percent, the largest excise tax Uncle Sam puts on any good in the nation.

Two senators ⏤ one a Republican, one a Democrat ⏤ recently introduced the Modern, Clean, and Safe Trucks Act of 2021, with a call to repeal that 12 percent FET on heavy-duty trucks.

Here’s the eyebrow-raising part. That 12 percent currently ads an average of $22,000 to the cost of buying a new tractor-trailer. 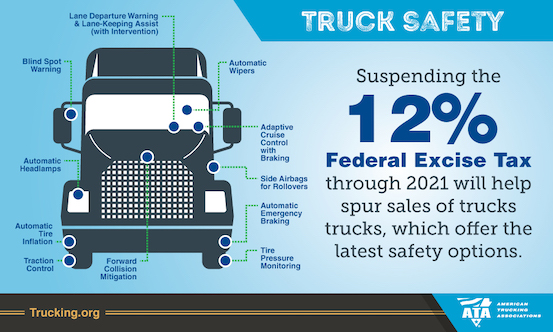 Our friends at the American Trucking Associations (ATA) have an interesting perspective on why that repeal would provide such an incentive:

“Although technological advances have made the latest tractor-trailers cleaner and safer than ever before, the FET creates a disincentive for motor carriers to modernize their fleets by placing a punitive surcharge on investments in new equipment. As a result, the average age of a truck on the road today is nearly ten years old.”

While the march is on for cleaner hydrogen-powered and electric engines, over the past 20 years cleaner fuel and advances in our current engine have produced a considerable reduction in emissions. Diesel engines are more fuel efficient and have saved millions of barrels of crude oil.

The ATA’s take is that this excise tax is actually keeping those more efficient trucks off the road. And this:

“A 2020 survey by American Trucking Associations found 60% of fleets would be either somewhat likely or very likely to buy additional trucks and trailers beyond currently scheduled purchase if the FET were repealed.”

And that’s not even talking about the owner-operator beginning his or her career, where that extra $22,000 for a new rig is beyond ability.

So, here’s to the repeal of a 104-year old tax. Connect that with the just-passed infrastructure bill: $15 billion for electric vehicles, $110 billion for roads and bridges, $11 billion for road safety. It’s a winning combination.