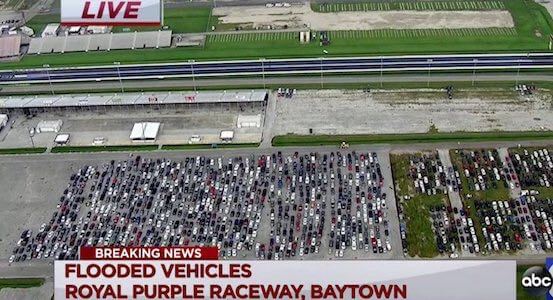 The impact of Hurricane Harvey continues to have a highly challenging ripple effect. While this is felt most prominently in Texas, other geographic areas also are experiencing the consequences.

For example: an estimated one million cars and trucks may have been destroyed in the aftermath of Harvey’s wind, torrential rain, and subsequent flooding. That number, includes cars owned by Houstonians and those parked in dealerships, would mean that this hurricane destroyed more vehicles than any other disaster in our history.

The majority of Houston’s auto damage falls into the uneconomical category. The harsh reality is that up to a million cars need to be removed.

NATCO has long partnered with other companies to help remove the physical impact of natural disaster. When the flood waters recede and the roadways are passable, cars and trucks need to be removed from their locations, including houses, apartment complexes, streets, and dealerships.

Those damaged vehicles need to go somewhere, out of the way. Emergency crews need to work with minimal impedance. Rebuilding crews need to remove debris and bring in new materials. Dealerships need to make room for fresh inventory.

What typically happens (unfortunately, we note that the logistics companies involved have all too much experience with these situations) is that staging areas are set up, in places removed from population density.

A good example: Seth Angel, president and general manager of the Royal Purple Raceway, 35 miles east of Houston, offered his 400 acres for housing up to 100,000 vehicles. Cars are delivered, and insurance adjusters swarm the area to assess and begin the processing of claims. Along with that, lights and generators and security fencing must be trucked into these areas.

We’re always troubled by the enormous losses as a result of such natural disasters. At the same time, we’re honored to contribute to rebuilding efforts.