Or: Our Butter’s in a Jam 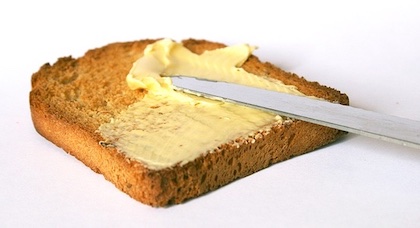 Picking the Right Side of the Toast

Okay, so on top of everything going on, butter prices are up 40% over this time last year. That’s due to a shrinking milk cow population and a labor shortage. The labor shortage is due in part to the pandemic. In more ways than one, we’re having trouble buttering our bread.

Beyond ⏤ or behind, or in front of, or spread all around ⏤ that is the lingering bottleneck issues at the ports of Los Angeles and Long Beach. And those are due in part to the commercial driver shortage. (Shortages come in all kinds of configurations.)

Transport Topics has an interesting perspective on the bottleneck at the ports. They’re angle is the seasonal cycling of supply-and-demand:

“The bottlenecked ports in Los Angeles face a narrow window between now and midyear to clear container backlogs before another import surge and union contract talks threaten to stall progress moving record volumes of cargo through the busiest U.S. gateway for trade.”

That lull in import surge is maybe a four-month window; after that time, as previous years’ patterns show, the summer and holiday season orders pick up. So, this window just might clear out some or most or all of the port bottlenecks. As the article describes it:

“The number of inbound ships has fallen by about one-third since hitting an early-January peak of 109, stacks of long-dwelling containers are shrinking and omicron cases among dockworkers are fading.”

We’re thinking that retailers and wholesalers ⏤ from mom-and-pops to the big box stores like Target and Walmart ⏤ will ramp up non-perishable inventory much earlier this year. It’s not that they were caught unawares last holiday season. Much of that inventory was on a ship or at a dock, bottlenecked, and not on their shelves. That’s nobody’s fault. Or everybody’s fault. Depends on who you ask.

What that doesn’t cover is the “union contract talks” part of the puzzle. And for that we wish a speedy resolution, with a compromise that rewards all parties.