Safety for Our Nation’s Drivers.

As a companion to last week’s blog on cargo theft, we explore here the state of parking lots for freight drivers across the country. 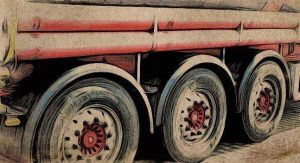 Annual cargo theft in the United States totals more than $25 billion in lost revenue. As we described last week, there are a number of possible and actual measures used to combat the situation.

By law, truck drivers are restricted to a certain number driving hours per day. Particularly on long hauls across greater distances, the ability of a driver to park in order to get mandatory—and needed—rest is essential.

According to Overdrive, the top five worst states for truck parking are: California, Rhode Island, Connecticut, Delaware, and New York. Part of the reason, especially in the Northeast corridor, is the heavy volume of traffic in highly-populated areas. So, capacity is a major issue.

The federal budget to create new parking areas and enhance existing ones is “not sufficient,” says Tom Kearney, emergency transportation and freight corridor manager with the Federal Highway Administration of the DOT. (The Federal Highway Association has scheduled workshops—on August 25th, in Dallas, at the Great American Truck Show and on October 5th in Grain Valley, MO at the OOIDA headquarters—to discuss the national truck parking shortage.)

Also, Congress has introduced HR1803 and S1187—knows as “Jason’s Law”—to address and fund more and safer parking options for truck drivers…though Congress sometimes moves slowly (the bills were introduced in 2011).

Short of federal funding, we are seeing movement toward public/private cooperation in the creation of safe parking lot. (New and enhanced parking lots make good economic sense. As a financial incentive, cities can receive sales tax from non-gas purchases—food sales, for example. And cities can collect property tax.)

In the meantime, we deal with the situation we have. Some truck stop chain are offering paid reservations for slots. And innovation comes into play: companies such as Pilot Flying J, have an online system for reserving a space at its locations across the United States and Canada.