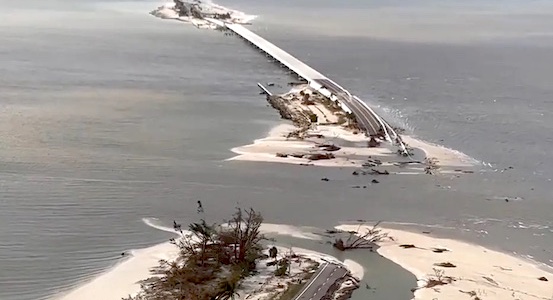 While we can never know, say, the trajectory of a storm or the kinds of and extent of damage, disaster recovery operations have had all-too-much experience at anticipating trajectory and damage.

We saw proof of this with Hurricane Ian last month. The Category 4 hurricane caused dozens of fatalities, more than $50 billion in estimated losses, and disruption to power, water, transportation, and shelter across wide swaths of Florida, North Carolina, and Virginia.

In general, NATCO’s contributions to disaster recovery have tended to deal with flooding that’s a result of storm surges, breeched levees,  and overflowing rivers and lakes.

In these scenarios, we orchestrate the movement of equipment ⏤ i.e., fencing, generators, lighting, heavy equipment, mobile response trailers ⏤ into position near or in the affected areas. And this happens before, during, and after the event.

Among other things, damage from Hurricane Ian included flooding and the closing of a bridge on I-75 that was a main artery for so many people. That affected some of NATCO’s loads: we had a much as a 100-mile detour to navigate. In that instance, we found the shortest, safest route…while we received an order to reposition nine additional pieces of equipment.

Now consider the effect of all this upheaval on drivers.

First off, in the best and worst of times, NATCO’s first priority is driver safety. We’ll never knowingly send a carrier into harm’s way.

With Hurricane Ian, we had several drivers who brought equipment in and continued to work in Florida and on other loads over the weekend. Of special note: these were drivers who were eager to work and pleased help.

Which we find extraordinary, and so very much appreciated.