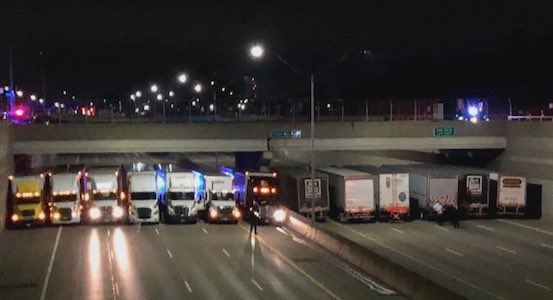 In Praise of Carriers. 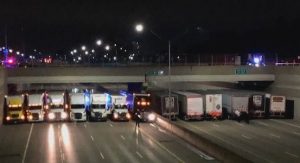 A Safety Net of Trucks

After midnight, people spotted a distraught man standing on a bridge over a highway in a suburb of Detroit, preparing to jump.

Authorities stopped highway traffic in both directions and then recruited 13 truck drivers to position their semitrailers under the overpass.

Had the man jumped without those actions, the situation likely would have ended tragically—for the distraught man, for the unwitting people in their vehicles who would have made contact or seen it happen.

The trucks created a literal safety net. With them, the jump distance would have been some five feet; without them, some 15 feet…plus vehicles moving at 60 miles per hour.

Authorities talked the man down three hours later and took him to the hospital for observation and counseling. A highway patrolman shook each truck driver’s hand in thanks.

Both as a human interest story of people acting as good Samaritans and from our position as participants in the logistics industry, this peaceful resolution makes us proud.

That story is an extreme example of how carriers are instrumental to us. More often, while their contributions are essential, carriers continue to work behind the scenes, hour after hour, day after day, their praises largely unsung.

That said, truck drivers contribute to and participate in important causes. For example, Truckers Against Trafficking is an organization devoted to fighting the epidemic of human trafficking. From their most recent annual report, 494,659 trucking industry members have registered and are trained to spot and report.

They deliver the food we eat, the clothes we wear, the materials to construct the homes we live in and the offices we work in. They expedite emergency supplies to areas affected by natural disasters. We extend our gratitude for the nation’s carriers.